Kill Pens are a class unto themselves. No place on earth [with the exception of the slaughterhouse itself] is more terrifying for equines. Taken from their pasture mates and cast into an unfamiliar environment filled with the shrieks and screams of frightened horses unsure of their destination, mishandled and usually rounded up with loud, motor driven ATVs few of them have seen before — it is the worst environment for determining the future of a disenfranchised horse.

The second picture is that of a group of horses known as ‘The Bowie Nine’.  Notice the ‘long distance’ shot. They belonged to an aged man in the Texas vicinity [80 upon his death] whose ‘pet’ Thoroughbreds wound up destined for slaughter via a Kill Pen facility known as the Bowie Sale Barn located in Bowie, Texas. The horses were unhandled and unhalterable — making their prospects quite slim indeed.

Some, of course, fit into several of these categories — especially the abused and neglected ones. 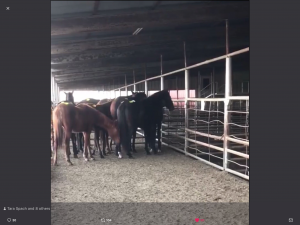 The worst thing an equine owner can do to a compromised horse of any size or stature is to send them to a kill pen buyer. There is never a valid reason  for doing this to a living, breathing and sentient animal — much less one that’s been a pet.

These [kill pen] people may present a ‘good face’ on the surface [or during initial meetings] but they make their livings sending literally tens of thousands of animals to certain death without a moment’s hesitation for no other reason than because they have slaughter contracts with slaughter facilities that must be fulfilled if they are to continue making money!

Horse meat today sells for $ .58 cents per pound and U.S. kill pens routinely ship all the horses they can gather to Mexico and to Canada to be sold as meat. The practices for killing them are brutal and inhumane — and if you find this difficult to believe, please look online at Youtube for horse slaughter videos. [Warning: They are horribly graphic and not for the faint of heart.]

Many people seem to want to justify horse slaughter by convincing themselves that the horses destined for slaughter are aged, lame, sick or dangerous.  Even if they were there are better options — but this set of beliefs is absolutely not correct. Most of the horses that go to slaughter are young, pretty and adoptable horses that are simply in the hands of people that no longer want them and do not want to be ‘bothered’ with finding alternate arrangements and rehoming the horse.

Some have been ‘duped’ into believing the horse is going to a new home.

Of course, kill pen buyers think nothing of reassuring the seller that the horse is likely to find a home via the sale process — but the deck is stacked against the horse unless they’re well trained or have a skill set that will make them more salable such as being a rodeo, ranch or racing horse that holds inherent value for a potential buyer.

Most kill pens are located in areas where there are enough horses to fill the slaughter trucks regularly — and, in the killing business, this means multiple truckloads per week. With the capacity of a slaughter bound 18-wheeler at 70-75 horses, [depending on how tightly they’re packed and they’re known to pack them tightly into the kill transport] it’s easy to see that every trip to Mexico or Canada nets them over $45,000.00. For most, three or more of those transports per week is considered ‘normal’ and, thus, they’re making about $ 135,000.00 per month. This represents at least $ 1.65 million per year just in slaughter contract funds alone and, again, these are conservative estimates based upon current prices for horse meat.

And for those that might want to justify horse meat as a cheap alternative to beef? Even a cursory glance at some of the tumor-ridden horses that are shipped to slaughter would turn the heartiest of stomachs. This meat is permanently altered by vaccines, butamine, a variety of horse ‘health’ products administered over the course of their lifetimes and even diseases are not uncommon.

Would you want your pet eating it? Because it’s coming home to us in ways consumers would never suspect.

When equine owners are desperately seeking a place for their horses, they should contact sanctuaries for support. The good ones answer their phones. The worst will avoid you unless you’re offering to donate funds — so the difference is readily apparent, even to the novice. Don’t be dismayed by a seeming lack of interest among the rescue community: Call us. We’re here to assist.

Kill pen buyers will pay $ 100 – $ 250 per horse. A true sanctuary will do the same. Contact us for assistance and our coordinators will guide you through the process of obtaining a home for your horse and/or arrange for them to go to a sanctuary if a home is not immediately provided. You will not incur any expenses whatsoever — even for transport — unless you want to share in the rehoming of your equine. If you want assistance in advertising your horse without expense, call us for a list of volunteers that will assist in posting your horse online for sale.

It’s important to note our organization works with all equines — including donkeys and burros. Should you have other ‘farm’ animals in need of a safe place, please call with locations to get timely assistance.

If a Kill Pen is still to be used [and we question why anyone would feel this to be their only options] then remember that a horse that is being shown at a kill pen should never be abandoned at that point in the process. First, other people such as rescuers or sanctuary operators may be brought in to bid on the horses there. A ‘P.O.’ can be utilized to pull the horse back if a proper price is not obtained. This is the same as what is called a ‘reserve’ at an auction — it is the buyer’s option to withdraw the horse if it does not meet a price requirement. If someone bidding on the horse bids it up to $ 2,000.00, for instance, the seller can be relatively certain the horse is not going to be sent to slaughter — because no one is going to pay more for the horse than they will receive at the slaughter facility. But it is also important to note that should something happen to the horse while it is at a kill pen, it could still be shipped to slaughter unbeknownst to the original owner. Many gentle, rideable horses are sent to slaughter through no reason of their own and, in fact, it often happens without the knowledge of the owner.

This is the inherent danger of dealing with Kill Pens. As one might expect, there is little ‘conscience’ on the part of people who routinely kill young, beautiful, adoptable horses simply to fulfill their end of a contractual obligation — and this, of course, is what Kill Buyers are about. These people also frequent OTHER SALE BARNS that are NOT associated with the words ‘Kill Pen’ with the intent of finding undervalued horses that they can send to slaughter.

Some of the other practices involved with Kill Pens is the willful separation of mothers from their foals so that the mothers can be shipped to slaughter and the foals sold off to rescuers.

Most thinking people would find these practices unconscionable but, again, we’re not dealing with people known for their exemplary ‘moral compass’ and, to them, ‘money rules supreme’. In more horse knowledgeable circles, Kill Pen buyers and operators are seen as the ‘thugs’ of the horse world. That said, BUYER BEWARE!

Do not, under any circumstances, expect that you can confidently deal with Kill Pens. Scams abound. They are known to defraud, whenever possible, even ‘regular’ customers and clients from whom they’ve ‘earned’ tens of thousands of dollars so, even if you’ve successfully dealt with them in the past do not let your guard down!

You will want to make certain you have everything in writing, that you NOTATE ABSOLUTELY EVERY ASPECT OF EVERY TRANSACTION on the documentation pertaining to what you’re paying for and when and you should familiarize yourself with the reputations of the individuals with whom you are dealing. Never, ever allow yourself to be duped into doing a cash transaction no matter what they might tell you to justify it — and ‘Paypal’ is never the best option for purchasing animals.

Instead, use bank wires and credit cards so you have a secondary means of support should you have difficulty with the transaction. Wire fraud is a crime! You can use bank wires to show your purchase history and you have the option of contacting law enforcement should you be defrauded.

It is TRUE that working with a kill pen is lining the pockets of killers — and each and every dime of profit turned by Kill Pen operators will only be used to buy more animals that will only, ultimately, be destroyed for a price.

In order to stop the Kill Pens from operating, the LAWS NEED TO BE CHANGED. For this to happen, members of ALL horse organizations, rescues and sanctuaries, rodeo competitors, rodeo fans and even those involved in every aspect of track racing all need to take a stand.

You may have missed